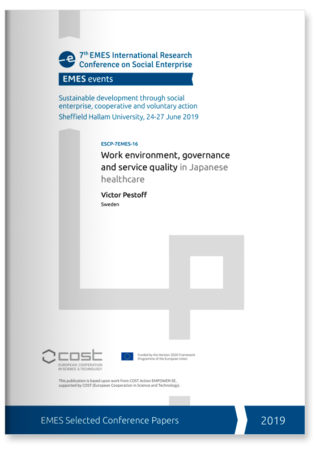 This paper explores the contribution of governance to the work environment and service quality of Japanese healthcare. Japan has a unique healthcare system with two user-owned cooperative healthcare providers. Together the Koseiren of Japanese Agriculture and the Health and Welfare Co-op Federation of the Japanese Consumer Co-op Union manage nearly 200 hospitals with almost 50,000 beds, which is more than the total number of hospital beds in Sweden and Denmark combined. Data for this project was collected by questionnaires to the staff at eight cooperative hospitals across Japan in 2016 and compared with similar data from the staff at two public hospitals in Osaka in 2017. The staff sample from the 10 hospitals reaches a total of 6,859, for a response rate of 72.1%.

Based on the Karasek & Theorell ‘demand, control, support’ model we expect that more staff control over their daily work-life will promote greater work satisfaction and more satisfied staff, in turn, will provide better quality services than dissatisfied staff. Moreover, inclusive governance models not only allow the staff more autonomy in resolving everyday work-life issues and problems, they can also promote a multi-stakeholder dialogue that facilitates greater patient participation in their own healthcare and contributes to better service quality.

Governance proves to be an intervening factor of significant importance and this paper considers three differentiated models for governing the provision of healthcare in Japan: a democratic, multi-stakeholder model; a stewardship model and a more traditional command and control model. These models can be distinguished in terms of the autonomy given to the staff in their everyday work-life as well as patient inclusion in hospital discussions and decision-making. The participatory form of democracy and collective action found in social enterprises providing healthcare can serve as a ‘best practice’ for other public and private providers in Japan and elsewhere

Weber’s ideal of modern public bureaucracy was based on a military-like hierarchal command and control model. This model became the central point of reference for the development of the public sector for most of the 20th Century. It was also adopted as a key organizational concept by industry and manufacture in advanced countries and dominated business administration until recently. Yet, it is increasingly apparent that it is both inadequate and inappropriate in the 21st Century, when services and work in the service sector have become the predominant form of production and employment. Ostrom (1996) and Osborne, et al., (2013) underline the differences between producing goods and providing services. Unlike goods, services often require the input or active contribution of the users or clients in the production process itself. This makes them co-producers of such services. Personal social services are often considered ‘relational goods’ by economists. If they are long-term or ‘enduring welfare services’, dissatisfied users will often have few if any options to exit. This makes voice more important for expressing consumer dissatisfaction and/or making suggestions to improve the service experience (Pestoff, 1998).

Healthcare in Europe and many other developed countries is now facing a complex and partly contradictory mix of challenges. Fiscal strains combined with a New Public Management agenda have caused cutbacks and calls for improved efficiency in public funded healthcare. This development is a significant contributor to a growing concern about service quality in healthcare. Other developments, such as increased demand due to an aging population and an increased level of individualization of services also add to the mix. The proposed solutions to these challenges in European healthcare help illustrate the severity of the problems. One solution suggested by market proponents is to further concentrate resources in larger production units and increase efficiency in order to ‘provide more care with better quality’. The problem with this solution is that the Scandinavian countries already have some of the most streamlined healthcare sectors in the world and there is probably a limit to how ‘efficient’ you can make healthcare services while maintaining acceptable levels of service quality. Another possible solution would be to increase public funding, but most European countries already have the highest taxes in the world. Thus, given these alternatives, a key issue for future healthcare in Europe is to find a way to provide high quality services to a greater number of patients at a reasonable and socially acceptable cost.

A different kind of solution is reflected in the growing interest in and practice of increasing public participation in healthcare. More than a decade ago the World Health Organization (WHO) maintained that there were basically three ways or mechanisms to channel public participation in healthcare governance: ‘choice’, ‘voice’ and ‘representation’. Choice mostly applies to individual decisions in selecting insurance providers and/or services. Voice tends to be exercised at the group or collective level to express public or group views. Representation implies a formal, regulated and often obligatory role in the process of healthcare governance (2005). In the United Kingdom it was recently argued that public and patient engagement in healthcare is ‘an idea whose time has come’ (Hudson, 2014), while the Office of Public Management states that ‘co-production is the new paradigm for effective health and social care’ (Alakeson, et al., 2013). Moreover, co-production can potentially combine choice, voice and representation, by actively engaging citizens in the provision of public services, at the site of service delivery (Pestoff, 2008; 2009).

Peters (1996) states that mobilizing and harnessing resources beyond the command and control of leaders in the public and private sectors becomes increasing crucial for the sustainability of society and the achievement of both public and private goals. Citizens provide critical resources today, so we need to consider how best to mobilize and harness their resources, both in their role as professional service providers and user/citizen or co-producers of public services. Moreover, he argues that in order to mobilize vast latent or currently unused resources in the public sector a participatory administration model should focus on empowering the lower echelons of the service providers and their clients that would decentralize much of the decision-making to them. This should be reflected in their work environment, work satisfaction and how they perform their daily tasks.