What assumptions behind social enterprise definitions and discourses? 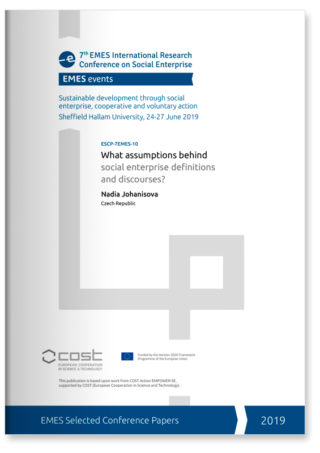 The concept of social enterprise (SE) was introduced in several post-socialist Central and Eastern European (CEE) countries after their entry into the EU, together with EU grant funding packages in support of SE start-ups. After a decade or more of this funding, several of these countries can boast a hundred or more SEs that have come into existence due to EU funding, also small teams of practitioners, academics and government officials conversant with the term, and, in most cases, a discourse equating social enterprise with enterprises primarily aimed at work integration of disadvantaged people. These SE have social aims and limited profit distribution, and are expected to have some kind of democratic governance. However, they are also expected to operate on the market and within a monetized economy, producing and selling goods and services, assuming economic risk, and aiming towards paid employment.

This understanding rhymes well with mainstream academic definitions of SE, such as that of the European Commission, and with early academic definitions of social enterprise (Borzaga and Defourny 2001). The concept of SE was soon embraced by institutions such as the UNDP and OECD. These institutions conceptualise SE similarly. One of the first publications on social enterprise, published by the UNDP and focused on Central and Eastern Europe was titled: Social enterprise: A new model for poverty reduction and employment generation. (Borzaga et al. 2008).

In this contribution, my argument is that the prevailing definitions and discourses of social enterprise in these influential texts spring from certain world-views, or ontologies, which are often undisclosed, or even not consciously reflected, by the authors. These ontologies influence discourses like the hidden groundwater that accompanies a river, in the riverbed. It is not seen, but it influences the water level and quality nevertheless.

In the mainstream definitions, such as the EC definition, SEs are understood as filling gaps (in terms of needs satisfaction) which the market and the state have been unable to fill. While SE are there to smooth the corners and to help include excluded groups in the labour market, the prevailing economic system is implied to be essentially sound, and in no great need of change.

Such a view basically springs from an ontology grounded in neoclassical economic thinking, which emerged in Europe in the 18th century. It is a narrative of an ever-expanding economy, where firms compete on an abstract market, maximize financial profit, and, via this market, provide goods and services to individual consumers who, in turn, maximize their utility. The EC aims to propell social enterprises into just such a market, and provide a “level playing field” for them to play on – and perhaps succeed, if they are “effective” and “competitive” enough.