Toward the re-invention of fair trade. The case of Central America 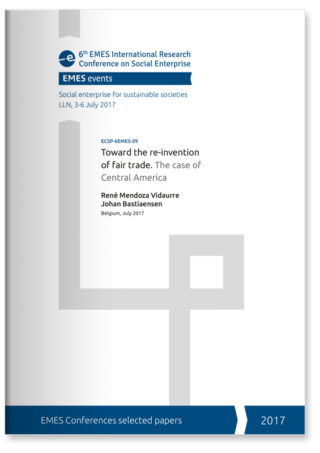 The Fair Trade Movement (FT) emerged in the face of unfair trade mediation as an alternative so that people that organize might improve their lives, and to be a space of solidarity among different actors beyond national borders. Nevertheless, in our case study on Nicaragua and Central America we show that the institutionality of the power relationships under elite market governance has been capable of setting FT against its own principles and turning solidarity into a mere formality. How can FT resist this market force and at the same time deepen its alternative FT principles? Taken as given that there are cooperatives, organizations and people that prove the importance of organizing and cultivating global solidarity, in this article we study certain practices of this FT network that seem to point to its involution, and on that basis we suggest that FT needs to reinvent itself. To do so we focus on coffee, which constitutes 70% of what is sold as FT.

The FT movement began in 1964 within the framework of the UN Conference on Trade and Development (UNCTAD). In 1973 trade in FT coffee began with Guatemalan cooperatives under the brand of “Indio Solidarity Coffee”. In the decade of 1980s the volume of products increased, and their design improved: solidarity stores sold combinations of coffee, tea, honey, sugar, cacao, nuts, bananas, flowers and more. In 1988 the “Max Havelaar” seal began operating. In 1997 the Fair Trade Labelling Organization was created (FLO) so that producer familiescould confront their adversities and vulnerabilities and improve their organizational skills (MacDonald, 2007). But, according to Taylor et al (2005:204), after having an ATO (Alternative Trade Organization) governance structure with strong roots linking consumers and producers, it shifted toward an impersonal brand and the search for market niches under a conventional strategy. In 2011 FT-USA and FLO divided, the former preached “fair trade for all” increasing even more the volume of coffee traded from producers without regard to whether they were members of cooperatives or not (Valkila, 2014).

Parallel to this division, the FT seal faced even more challenges – more competition from other seals with attributes similar to FT. Many coffee buyers and roasters opt for the direct-trade approach instead of fair trade. Many cooperatives face a mixture of governance and “privatization” crises with their resulting turn toward less democratic governance structures. This is an expression of a context of the all absorbing neoliberal market, in which FT increases its volume geting into the conventional market, while it neglects a good part of its principles of transforming unjust trade relations.

This all absorbing context is shaping the actors, and at the same time is shaped by them. This directs our attention to the relationship between the structure and the actors (Long 2001). The structural perspective by itself runs the risk of determinism, while just looking at the actors and their actions runs the risk of voluntarism. Structures are expressed in rules and regularities, collective and persistant phenomena, while social actors produce and reproduce the structures, interpreting them in their actions. The structures, like conventional or FT mediation, limit and facilitate the action of the social actors without 100% determining them.

Within this structure-actors framework, we propose that FT resolve this paradox of growth with involution by going back to being “alternative” as it increases its current growth, deepens its democratic structures and improves its capacity of governing those markets. To do so, we work with a foundation of information and analysis from various sources. First, we reviewed studies on FT, analyzed secondary data and tested the process of weighing coffee from its cherry to export state, including cupping parallel to what the organizations did. Second, we talked with managers of companies, individual merchants and producers, coffee buyers and roasters from FT and direct trade, inspectors of the certifiers, cooperatives in Europe, social bank officials and directors of international aid agencies; within this framework we studied outstanding cooperatives and associative enterprises in each country in Central America (see Mendoza, 2016a, 2016b, 2016c, 2016d and 2017a). Third, since 2010 we have worked with 35 first tier cooperatives in Nicaragua (20% of the total first tier coffee cooperatives) and with various organizations from other Central American countries, accompanying them in their actions and reflections, an immersion that has given us an understanding from inside the cooperatives. Finally, we organized spaces for reflection where we triangulated information and analysis with the members, staff and board members of the cooperatives.

After this introduction, we present the innovative character of FT. The second section describes the context of the neoliberal market that is absorbing what is innovative of FT. The third and fourth sections discuss the involution processes. The conclusions summarize the principal findings and suggest a path for the re-invention of FT.