Toward a conceptual framework for religious logics on institutional complexity: a lesson from ‘mission drift’ in Evangelical Christian social entrepreneurs in Ethiopia 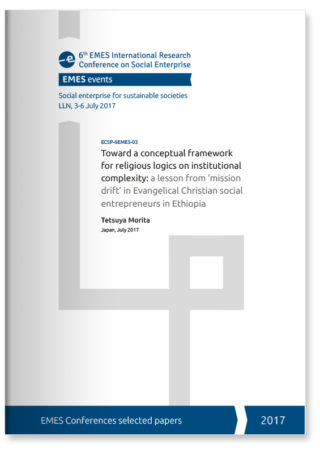 Social enterprises (SEs) have played a significant role in providing an alternative way to charitable development aid for poverty reduction in the developing countries over the last few decades (Fowler 2000). Ethiopia, a post-socialist country, is one of exemplary nations where the social entrepreneurial approach has been increasingly adopted by local entrepreneurs to leverage the potential of world’s most rapidly growing economy. Evangelical Christians, one of the fastest growing religious groups in Ethiopia, have tapped into this opportunity to establish faith-based SEs (FBSEs) to address social problems such as poverty and inequality. However, they are not immune to the risk of diverging from their original purpose – mission drift – not only in social and business objectives, but also in spiritual objective of FBSEs.

While scholarly research based on institutional theory seeks to understand these interplay of conflicting pressures toward such hybrid organizations as SEs that inherently embrace multiple logics (Kraatz & Block 2008), there remains “the omission of religious logics in social entrepreneurship scholarship” (Zhao & Lounsbury 2016: 645). As it has been known that many SEs are established by religiously affiliated organizations or individuals that espouse their religious belief and faith (Spear 2010), the scope of mission drift in faith-based SEs (FBSEs) becomes even further complex when SEs include spiritual missions associated with their religious faith at their core. Considering an ever increasing role of FBSEs in the developing countries like Ethiopia characterized by growing market economy but strong state intervention to civil society as “developmental authoritarianism” (Matfess 2015: 182) and unfavourable institutional environment for doing business such as cases of fraud and corrupted behaviour in both public and private sector (Plummer 2012; Abegaz 2015; Hagos 2016), it is of critical importance to address the challenges facing FBSEs and to advance theoretical framework on institutional complexity by unpacking what and how religious logics in FBSEs work toward avoiding mission drift.

The paper aims to spark new directions for theoretical understanding of strategic response to institutional complexity. This paper first outlines the theoretical background to the hypothesis on how religious logics could influence on strategic response to institutional complexity of faith-based social enterprises in the developing countries, and then introduces the research method and context. Thirdly, I present preliminary findings and analysis, which delineate the practices that help manage social, financial and religious logics in FBSEs. I then propose a tentative direction for conceptual framework for analysing institutional complexity for hybrid  organizations.