Between a rock and a hard place. The hybrid character of social enterprises 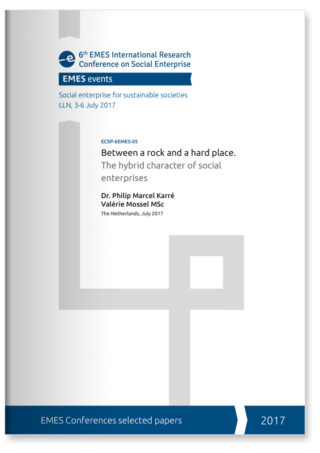 In The Netherlands, there is increasing political and media attention for social initiatives at the local level, whereby citizens themselves take responsibility to address social issues (Boer and Lans, 2014; Miazzo and Kee, 2014; Schleijpen and Verheije, 2014; Uitermark, 2012). Urban neighborhoods and communities are seen as important laboratories or breeding grounds for new social and economic practices under the label of social innovation. By this we mean new ideas to deal with social challenges that are “created mainly by networks and joint action in social realms beyond business and government routines [and that], at any given moment, raise the hope and expectations of progress towards something ‘better’ (a more sustainable/democratic/effective society)” (Brandsen, Evers, et al., 2016: 6–7) In The Netherlands, these practices are commonly described as a new way of ‘city making’ (‘het nieuwe stadsmaken’) (Franke et al., 2015), a kind of social innovation characterized by a new culture (in which others than the traditional actors of governments and property developers play a dominant role in urban regeneration and development), a new, civic economy (in which economic and social goals are combined) and a new kind of entrepreneurs (who combine economic and social values).

One kind of social initiative very much in the spotlight are social enterprises, that integrate “economic and social value creation” (Mair and Martí, 2006: 36) and, according to the widely used definition of
the international EMES research network, share a number of common features (Defourny, 2014: 25– 28):

Social enterprises are hybrid organizations (Battilana and Lee, 2014a; Pestoff, 2014; Teasdale, 2012a): social entrepreneurs create public value at the interface of government, market and society by engaging in commercial activities (Schulz et al., 2013: 5). That means they try to combine two contradictory logics: the entrepreneurial and social logic, which can be regarded as each other’s antonyms.

International research (Doherty et al., 2014) as well as a survey conducted by the Social and Economic Council of the Netherlands (SER), which is the Netherlands’ government’s main economic advisory council, and exploratory talks we conducted at the outset of our study, show that their hybrid character can be a double-edged sword for social enterprises. Combining an entrepreneurial and social logic creates a number of opportunities: it can foster the kind of synergy and innovation through which social entrepreneurs can really make a difference. Its hybrid character is the essence and the
unique selling point of social entrepreneurship.

But hybridity can also lead to a number of risks (eg. mission drift and conflicts between goals and values) and other challenges. Hybrids are always viewed with suspicions (‘are you really social or, above all, an entrepreneur?’). The Dutch social entrepreneurs surveyed by the SER felt that, due to their hybrid status, it was difficult to explain what they are doing and why, as it is generally easier to explain what the hybrid is not than what it is. Because of this, they often felt misunderstood and put down as benevolent amateurs or failed entrepreneurs looking to make a profit from exploiting vulnerable groups. The social entrepreneurs we talked to at the outset of this study echoed this sentiment, as did those spoken to during earlier studies undertaken by our research group (Brabander, 2009; Sterk et al., 2013). (…)