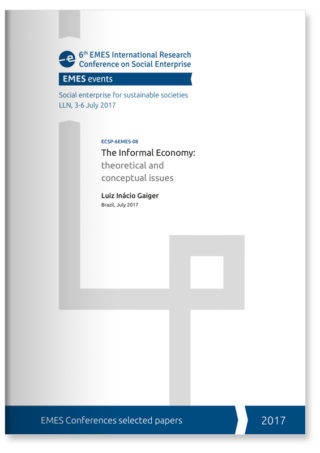 During the last decades, economic informality has remained an expressive standard in several countries and continents. Contrary to the expectations raised by modernization theories, on the formalization of the informal, there was no waning of informality. New impulse factors, engendered by the regime of flexible capital accumulation, have fuelled it in a number of ways, while the deregulation of labor relations, coupled with the economic recession, has favoured its resurgence. Informality is not bound to disappear, as long as the spread of the formal economy continues to confront persistent structural obstacles that at times maintain it practically as a sector located in the midst of the informal predominance. In broad areas of the globe, we come across a hybrid “institution” of the economy (Polanyi 1957), in which the enforcement of regulations and legal frameworks remains partial and restricted.

In studies on the subject, informality has been seen in several ways: as a phenomenon dependent on the capitalist economy, functional to the preservation of the reserve industrial army and attenuating the misery; As an atypical phenomenon in the face of capitalist economy, determined by contradictory factors and marked by notorious ambiguity; As a phenomenon opposed to the dominant economic logic, harbouring anti-capitalist and virtuous forms, as exemplified by the solidarity economy. While the first approach commonly adopts a perspective of deductive analysis, from the general to the particular and from top to bottom (top-down), the second and third approaches guide their analysis as a rule from bottom to top (bottom-up), giving prominence to the creativity and capacity of self-organization and adaptation of the popular economy.

Although the theories underlying these approaches diverge, there is no general mismatch between these analytical perspectives, provided that the universes of social practices and relationships under analysis are clearly announced. The habitual use of encompassing concepts, in the absence of a prior evaluation of its explanatory and heuristic power, leads to metonymies. This has occurred in the studies on informality because of the absence of categories that discriminate the various realities that intersect and intertwine under the mantle of the informal. The reiterated ambiguity of the informal thus rests, to a large extent, on inaccuracies found in the conceptual plane.

To understand informality, it is necessary to critically review current approaches and adopt appropriate theoretical perspectives and concepts. One of these required measures is the clarification of terms and concepts as a rule used interchangeably, such as informality, informal sector and informal economy. Figure out what is singular in these terms, or common among them, leads to differentiated treatments. Renouncing the use of unique notions, we will arrive at a conceptual distinction between informal employment and informal economy and a better understanding of the scope of concepts such as informal work, popular economy and solidarity economy.

From the theoretical point of view, it will be necessary to supplant unilateral positions, such as the thesis of dependence and functionality of the informal in relation to the capitalist economy. Or the (sounds better) opposite thesis, that takes the informality as a reflection of the excessive and unreasonable interference of the State, which would hinder initiative and oblige micro entrepreneurs to bypass the law in order to conduct themselves freely in the market. In the same way, one must question the approaches of the informal through its opposition to the formal, whose starting point and background is the modern economy, in turn identified spontaneously with the capitalist market economy. From this point of view, the informal is seen as a defective form of economy, a reflection of the state of deficiencies and weaknesses of its economic agents or, according to a critical bias, as a result of the structural relations of subordination and exploitation to which such agents are subjected by capitalist logic.

The informal economy must be understood from its specific features. With this approach, two aspects will be highlighted: firstly, the fact that it must be understood from the organizational principles that are its own, despite being devoid of provisions formally endorsed and sanctioned by the legal frameworks in force. The informal economy incorporates a self-regulated social and economic dynamic, a sui generis rationality. This specific nature is not perceived as the centrality given to the logic of the market leads to approaches limited to the economic sphere. There are few studies on the cultural dimension of informal businesses, their peculiar social dynamics and the existence, to some extent, of a preference of the economic agents for informality.

Secondly, the theoretical primacy given to the market distances us from a plural conception of the economy, which is a prerequisite for evaluating the effective performance of informal units for subsistence, as well as local development processes, among other aspects. The informal economy must be understood as a form of socially embedded economy, in the sense given by Polanyi (1957, 2000). This makes it irreducible to strictly economic properties and functionalities. The central logic that governs its functioning corresponds to the social reproduction of domestic units, which is sought through relational assets from the family sphere and its surrounding circles. This particular socioeconomic logic is what Razeto (1990) calls commensality.

The understanding that the informal economy introduces a modus operandi in the economic terrain, according to specific forms of agency of social bonds, allows to extend a conceptual gradient that relates it to similar forms, but endowed with other peculiarities. One can then distinguish more clearly the informal economy from the popular economy, especially the fact that the differences between them are mainly of approach, of analytical perspectives. The same is true of initiatives of an egalitarian and participatory nature associated with the solidarity economy, whose studies are aligned with an agenda of issues with a view to examining – and at the same time emphasizing – those features.