You are here: EMES - International Research Network | Publications | Conference papers | 4th EMES Conference - EMES-SOCENT Selected Conference Papers | Variety in hybridity in sport organizations and how they cope with it 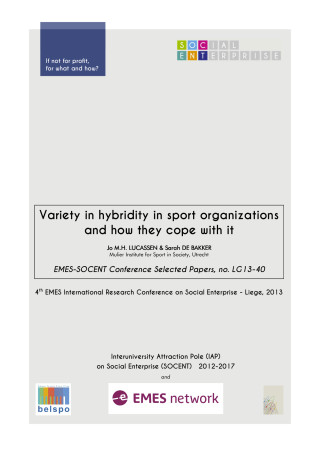 The way in which sport organizations are governed is a very current issue. An important trigger for this current interest have been several incidents that have appeared in (professional) sport, e.g. confessions of doping use by professional cyclists (Armstrong, Rasmussen, Boogerd), cases of match fixing, corruption (Atlanta 1996) and fraud and the death of referee Nieuwenhuizen in the Netherlands as a consequence of football violence. They all raise the question whether sports organizations are governed in a sound way. The issue is not new and has been given thought by sport organizations for some time. In the Netherlands the umbrella organization NOC*NSF has introduced a governance code almost a decade ago (NOC*NSF, Commissie goed sportbestuur 2005). Comparable initiatives have been taken in other countries (New Zealand, UK, US, South Africa – Alm 2013). National sport organizations have to adhere to the governance guidelines and take measures to adjust their practice accordingly. The implementation is followed critically. NOC*NSF for instance organised an evaluation congress in 2012 in cooperation with Transparancy International (Transparency International 2012). The international Play the Game organization has started a reviewing project ‘Action for Good Governance in International Sports Organizations and introduces a Sport governance observer (Alm 2013).

The sports sector is not the only societal sector in which the quality of governing and management has been stressed and a governance codes has been introduced (Algemene Rekenkamer 2008; Balkenende 2011; Houlihan 2013; Kjær 2004). Good governance has become a more important issue because views on the role of government in industrialised societies have been changing and many public responsibilities and tasks have been outsourced to social organizations (Rhodes 1996). Organizations that are being subsidized by public funding are confronted with growing demands for accountability and intensified supervision and control toward the way they are managed and governed (Albeda 2002; Baarsma 2005; Bovens & ’t Hart 2005; Groot 2010).