You are here: EMES - International Research Network | Publications | Conference papers | 3rd EMES-Polanyi International Seminar | When the domestic is also political: redistribution by women from the South. A feminist approach

When the domestic is also political: redistribution by women from the South. A feminist approach 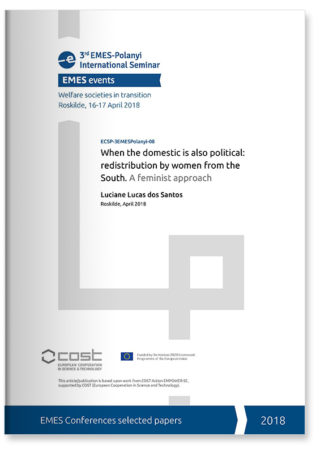 The possibilities of dialogue between Feminist Economics and Polanyi’s thought are already well-known. Feminist scholars have not solely recognised that Polanyi’s ideas could be compliant with feminist concerns (Waller and Jennings 1991; Hillenkamp 2013; Fraser 2005) but also some of his works explicitly refer to the domestic as an important domain to be considered (Hillenkamp 2013).

Even so, Polanyi’s theory and his concept of disembeddedness were not lacking of critiques for having ignored, to a certain extent, the role of non-market institutions in the shaping of market economies. Despite these critiques from a feminist standpoint, Polanyi’s work provides a suitable and friendly framework for analysing the diversified ways through which different women, in different contexts, may play a pivotal role concerning the shaping of reciprocity, redistribution, householding and exchange – as can be seen in indigenous communities and some popular economic arrangements.

In this paper, I come back to the feminist critique to discuss the domestic domain and its potential of fostering women subaltern arenas (Fraser 2005). I particularly focus on women from the South, from whom passiveness is a condition mistakenly expected. Departing from the Epistemologies of the South (Santos 2014) and a postcolonial feminist approach, I argue that the redistribution performed by women themselves should be better framed. The flawed academic debate on the role played by different women from the South in the very redistribution of the community resources and in the building-up of their communities’ material life demonstrates that women’s capacity to foster different compositions of economic principles has been underrepresented in Feminist Economics literature.