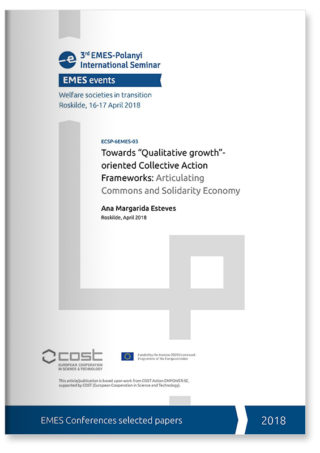 Under what form would a convergence between the Commons and Solidarity Economy movements promote “qualitative growth” (Capra and Henderson 2014) in a way that also ensures equity, justice and participatory democracy in access to resources? What aspects in the predominant organizational forms emerging from these movements need to be addressed in order to make such convergence possible?

This paper is based on an inductive comparative analysis of three major types of commons-based peer production (CBPP): An ecovillage, an “integral cooperative” and a self-identified commercialization-based solidarity economy network. Benkler (2006) defines CBPP as a modular form of socioeconomic production in which large numbers of people work cooperatively over any type of commons.

The case studies were chosen due to the fact of being leading agents whose practices are reproduced within three of the largest and most significant international social movement networks operating in the fields of the Commons and Social Solidarity Economy. They also represent three infrastructure types1 of “new commons”: