You are here: EMES - International Research Network | Publications | Conference papers | 3rd EMES-Polanyi International Seminar | Elements of the institutionalization process of the forest and pasture commons in Romania as particular forms of social economy 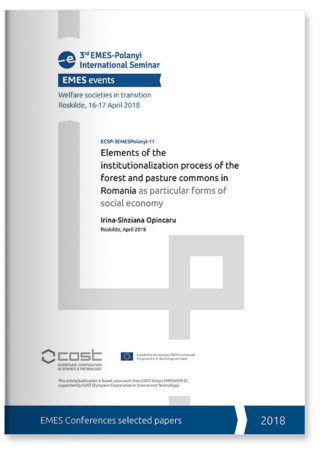 Building on Garrett Hardin’s concept “the tragedy of the commons” (Hardin, 1968), Elinor Ostrom’s work (e.g. Ostrom, 1990) was the starting point of a wealth of studies and papers regarding common-pool resources all around the world. In Romania, the study of jointly-owned property (devălmășie) was of great interest for social scientists during the different political regimes of the country. The most prominent figure in the study of the Romanian commons before and during the communist regime was Henri H. Stahl (1958), who together with other Romanian sociologists (e. g. Caramelea, 1944, 2006) gave detailed monographic accounts of these organizational forms. After the 90’, the topic faces a diversification of the theoretical frameworks, the commons being studied either from a sociological perspective (Vasile, 2006, 2007, 2008a, 2008b) or from a legal or policy perspective (e.g. Bouriaud, 2008; Sutcliffe et al., 2013). In the last 10 years, sociologists also started to research the Romanian commons in the larger framework of social economy, considering them among the entities for which comprehensive statistical socio-economic data was collected and analysed (Cotoi and Mateescu, 2013; Petrescu, 2013).

My paper comes to complement this new trend and aims to identify and define the contemporary Romanian commons by reference to the general characteristics of social economy organisations. In order to achieve this and obtain a clearer view of the place of the commons in Romania’s organisational environment, I aim to grasp some elements of the commons’ institutionalization process after the fall of the communist regime.

For this purpose I will use the theoretical framework of the new institutionalism (DiMaggio and Powell, 1983; Scott, 2001; Powell, 2007) to explore the process of reestablishment of the historical commons from three major perspectives: the legal framework available, the process of restitution of ownership rights (both collectively and individually) and the relationship between the commons and the public bodies. Also, I will make use of Laville’s (Laville et al., 2006) perspective of political embeddedness of social enterprises in discussing the public policies that contributed to the reestablishment of these organisations. These two objectives are to be achieved by analysing a database comprising 328 questionnaires applied to the presidents or other board members of commons all over Romania and various legal documents such as official legal texts, bylaws etc.

Whenever the case will be to illustrate some specific situations, I will use examples of the commons from counties that I study in depth. I argue that the restitution process that lead to the reestablishment of the Romanian commons, a process that was marked by hardships, conflicts, misunderstandings or faults, deepened the scarce knowledge of the political actors, general public and other stakeholders in regard to these organisations and perpetuated their unclear position in the organizational field.