You are here: EMES - International Research Network | Publications | Books | Civicness in the Governance and Delivery of Social Services

Civicness in the Governance and Delivery of Social Services 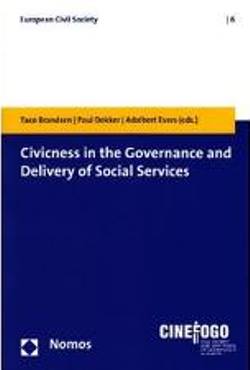 The global financial crisis has renewed concern about whether capitalist markets are the best way of organising economic life. Would it not be better if we were to treat the economy as something made and remade by people themselves, rather than as an impersonal machine?

The object of a human economy is the reproduction of human beings and of whatever sustains life in general. Such an economy would express human variety in its local particulars as well as the interests of all humanity.

The editors have assembled here a citizen’s guide to building a human economy. This project is not a dream but is part of a collective effort that began a decade ago at the first World Social Forum in Porto Alegre, Brazil, and has gathered pace ever since.

Over thirty original essays address topics that range from globalisation, community participation and microcredit to corporate social responsibility and alternative energy. Each offers a critical guide to further reading.

The Human Economy builds on decades of engaged research to bring a new economic vision to general readers and a comprehensive guide for all students of the contemporary world.

Go here to purchase this volume.