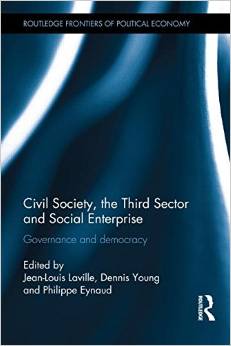 If the twentieth century was only focused on the complementarity and the opposition of market and state, the twenty-first century has now to deal with the prominence of the third sector, the emergence of social enterprises and other solidarity hybrid forms. The concept of civil society organisations (CSOs) spans this diversity and addresses this new complexity.

The first part of the book highlights the organizational dimensions of CSOs and analyses the growing role of management models and their limits. Too often, the study of CSO governance has been centered on the role of the board and has not sufficiently taken into account the different types of accountability environments. Thus, the conversation about CSO governance rises to the level of networks rather than simple organizations per se, and the role of these networks in setting the agenda in a democratic society.

In this perspective, the second part emphasizes the institutional dimensions of CSO governance by opening new avenues on democracy. First, the work of Ostrom about governing the commons provides us new insights to think community self-governance. Second, the work of Habermas and Fraser opens the question of deliberative governance and the role of public sphere to enlarge our vision of CSO governance. Third, the concepts of substantive rationality and economy proposed respectively by Ramos and Polanyi reframe the context in which the question can be addressed. Lastly, this book argues for a stronger intercultural approach useful for the renewal of paradigms in CSOs research.

This book has for objective to present a unique collective work in bringing together 33 authors coming from 11 countries to share perpectives on civil society governance and will be of interest to an international audience of researchers and policy-makers.