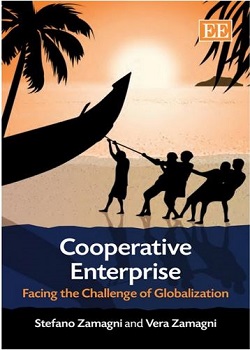 This eloquent book analyses the theory of the cooperative form of enterprise from an historic perspective, whilst assessing its appeal in the current economic environment.

The authors show that cooperatives are enterprises acting in harmony in the market economy, and explore the following questions:

• How do cooperatives achieve solidarity in keeping together elements normally considered in conflict?
• Why is the cooperative enterprise not as widespread as the capitalist enterprise?
• What is its appeal in the present conditions of crisis of the world economy?

Alongside other related issues, the volume also discusses the theoretical foundations of the cooperative enterprise and offers an overview of the historical development of the cooperative movement around the world. Special reference is made to the Italian case, which is scarcely known within the international milieu.

Broad in scope whilst concise in elucidation, this book will be invaluable to students enrolled in economic, social, historical and political curricula, as well as leaders of the cooperative movement. People interested in finding a practical alternative to the capitalist form of enterprise will also find this book enriching.