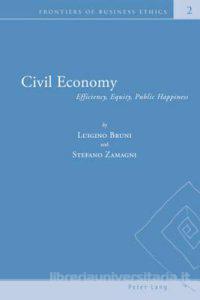 This volume has a double purpose. First of all, it follows an Italian tradition of thought that began in the 15th and 16th centuries as Civic Humanism and continued up until the golden period of Italian Enlightenment as represented by the Schools of Milan and Naples. Its main contribution to the history of economic thought is its conception of the market as a place centered on the principle of reciprocity and civil virtues. This book explains why the civil approach to economics disappeared from cultural debates, scientific enquiries and the public arena at the end of the 18th century, only to surface again in more recent times. <BR> Secondly, the book draws attention to a new reading of the whole of economic reality. Indeed, the civil economy in one sense is mainly a <I>cultural perspective from which it is possible to interpret the entire economic discourse. If a theory is considered as substantially a <I>point of view on reality, then this <I>cultural perspective can also set the basis for a diverse economic theory. <BR> Where does the key element of such diversity lie? It lies in the attempt to integrate within the economic system the three basic principles of any social order: the principle of exchange of equivalents, the principle of redistribution and the principle of reciprocity. Though this book draws on the history of economic ideas, it focuses on the present day from an ancient perspective in order to find convincing answers to the new questions arising in the era of globalization.