You are here: EMES - International Research Network | Publications | Conference papers | 7th EMES Selected Conference Papers | To profit or not to profit? That is the wrong question

To profit or not to profit? That is the wrong question 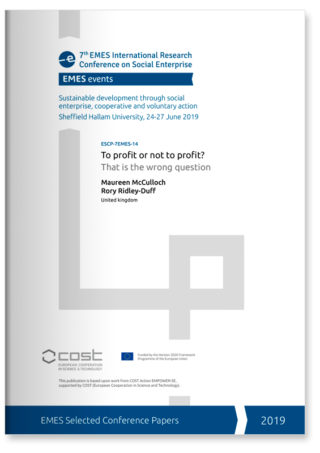 In social economy research, the issue of ‘profit’ (whether to make and/or distribute it) is a dominant framing concept. We argue that this dominance (even negatively referenced) maintains the hegemony of financial capital and the ‘for-profit’ paradigm. By refusing to accept a definition that labels organisations in terms of what they are not, scholars of co-operative development, social enterprise and voluntary action can better understand the value-creating activities of third sector organisations (TSOs) on their own terms. We argue that scholars and policy makers are complicit in maintaining the dominance of financial capital and the for-profit paradigm when they adopt for-profit/non-profit language in debates about their field. The counter-narrative we offer is based on engagement with work from the International Integrated Reporting Council (IRC) and FairShares Association (FSA). By comparing six capitals defined by the IIRC with the FSA’s statement on ‘six forms of wealth’, we offer a new way to account for the wealth creation of co-operatives, (other) social enterprises and voluntary associations. This ‘for-purpose’ framework for TSOs “reclaims the conversation” by identifying the wealth creation of social enterprises in comparison with the wealth destruction of private companies locked into chrematistic accounting and reporting practices which focus on the pursuit of profit for its own sake. This allows the fundamental differences between for-purpose enterprises (primarily social) and not-for-purpose businesses (primarily financial) to be clearly articulated.

The issue of ‘profit’ (whether to make and/or distribute it) remains a dominant framing concept in western society, affecting the identities, practices and management education offers of Business Schools (Parker, 2018). We argue in this paper that this is to the detriment or co-operatives and (other) social enterprises who struggle to communicate their value through either ‘for-profit’ or ‘not-for-profit’ accounting frameworks. Nevertheless, the latter has developed an alternative way to account for financial activities that goes beyond explaining them in financial terms. Not-for-profit accounting can be a starting point for a new conversation about accounting systems for organisations that define their purpose in terms of meeting their members’ social, economic and/or environmental goals.

For this paper we ask the question “What can the concept of ‘for-purpose accounting’ offer social enterprise scholars? To build our argument, we return to Aristotle’s ethics and economics to define the differences between for-purpose accounting and for-profit accounting methods under IFRS (West, 2017). The dominance of ‘profit’ as a framing concept in studies of the social economy (even negatively referenced) is problematic because it maintains the hegemony of financial capital and the ‘for-profit’ paradigm. It renders the social economy invisible by using language that hides its contribution to wealth creation, and under-reports the social and economic value of charitable trading activities (in voluntary associations), co-operative and mutual enterprises, and socially responsible businesses (Ridley-Duff and Bull, 2016, 2019).

Our goal is to flesh out the concept of ‘accounting for purpose’ so that organisations that articulate their raison d’être in term of social/environmental goals and/or changes to relationships between people, property and their environment have a meaningful alternative to the language of ‘for-profit’ and ‘not-for-profit’ accounting. Importantly, the term ‘for-purpose’ does not depend on notions of ‘profit’ for definition. Its validity as a term enables it to capture contributions to wealth from all third sector organisations and social enterprises irrespective of where legal framing places them in existing for-profit/not-for-profit categories.

The paper is organised as follows. In the first part, we deconstruct existing accounting frameworks to expose their fundamental weakness – the inability to capture the value proposition of co-operative and mutual enterprises (and other social enterprises and responsible businesses) that blend social/environmental and commercial commitments (Emerson, 2000). We then compare two frameworks: one developed by the International Integrated Reporting Council (IIRC, 2013) to reform private enterprise accounting, and another developed by members of the FairShares Association to support social enterprise development (Ridley-Duff, McCulloch and Gilligan, 2018). Both illustrate shortcomings (and destructive impacts) from framing TSOs as ‘for-profit’ and/or ‘not-for-profit’ organisations. This analysis underpins a ‘for-purpose’ alternative that renders co-operative, social and voluntary enterprises as a coherent and inter-linked mix of member-driven organisations that generate ‘six forms of wealth’. Using the alternative framework, we conclude that a new articulation of the value creating activities of social enterprises (particularly co-operatives) can express wealth in terms of access to six types of capital.