Social enterprises of urban agriculture and the resilience in cities: Belo-horizontinos and Londoners popular movements that defy the hegemony neoliberal 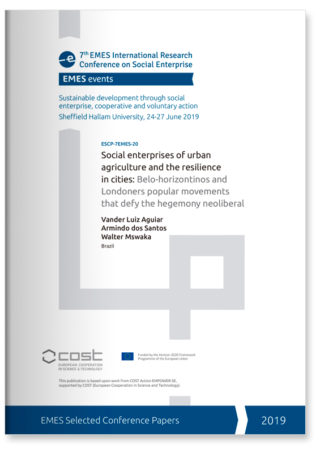 In the last two centuries, the world population has jumped from one billion to more than seven billion people. In addition, by the year 2050, nine billion individuals with more than 70% of this contingent living in the cities are estimated (Santos, 1988; Durand, 1977). Increasingly, the world becomes urban (Lefebvre, 2013) and the demand for socio-environmental services grows. In this context, the need of the population and the inability of the governments corroborate the neoliberal hegemony, a scenario in which the state loses power for the market sector. In different ways, both Brazil and England are intensifying their neoliberal policies (Maricato, 2017; Nicholls & Teasdale, 2017), which justifies asking: how are social enterprises of urban agriculture influencing the resilience of the cities of Belo Horizonte and from London.

To answer this question, the qualitative approach was used as a research methodology when conducting a holistic multiple case study (Maffezzolli & Boehs, 2016). The unit of analysis belo-horizontina was the Jardim Produtivo and London was Stamford Hill, both are producers of vegetables. In these units, in 2016 and 2017, the author made direct observation and did interviews, in addition to resorting to documentary sources (Yin, 2005). Starting from partnerships between governmental entities and the third sector, the Productive Garden was established in 2007.

The project that originated Stamford Hill is also from 2007, but the initiative came from the second sector. In the latter case, a private company was supported by English non-governmental organizations. The two enterprises are considered social enterprises (Defourny & Nyssens, 2017) of urban agriculture (Mougeot, 2005). The management of the two companies was transferred to the local communities after their establishment.

Research has shown that, even in areas where capitalist enterprises predominate, social enterprises can contribute to increasing resilience (Klug, 2018) of cities. In the two empirical cases investigated, favorable environmental impact was observed, since the food miles reduced and the green areas increased. In addition, the local population felt safer with the occupation of vacant lots and the supply of agroecological products grew in both cities, which reduces the burden of public health services (De Oliveira Trecha et al., 2017).

The work also showed that Stamford Hill’s main contribution to London’s resilience was in the social dimension. The families there use the garden space to get together and receive friends. In this respect, the Jardim Produtivo differed, since most of its workers were focused on the financial side of the business. In the Brazilian case, the company contributed to making the city more resilient in the economic dimension, especially for the low-income population.

The main limitation of this study was the small number of cases investigated, which made generalizations unfeasible. For this reason, it is suggested to approach new social enterprises of urban agriculture in other works.