Political practice and dimensions of solidarity economy: a case study from Cochabamba, Bolivia 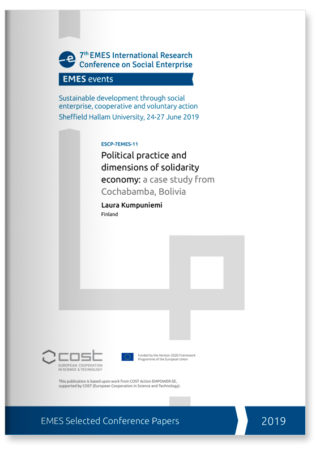 In Bolivia, solidarity economy has been gaining interest in the past 20 years. My case analysis is based on ethnographic fieldwork in Cochabamba, Bolivia, where I have spent in total eight months in three periods between 2016–2018. My data consists of interviews, events, observations, and notes on discussions as well as documents and photos. After transcribing hand-written notes and recorded interviews, I have analysed the materials thematically using atlas.ti. I have used both predetermined theory-based and data-based themes in my analysis, but this paper is mostly based on predetermined codes that cover the research participants’ motivating factors and values and different aspects of organising and activities in different levels of the society.

This paper presents the first results of my PhD research about solidarity economy activities and their impact on democratisation in Bolivia. With my research, I hope to offer new information about the political nature of solidarity economy in Bolivia by analysing different dimensions of politicisation through Gibson-Graham’s framework.