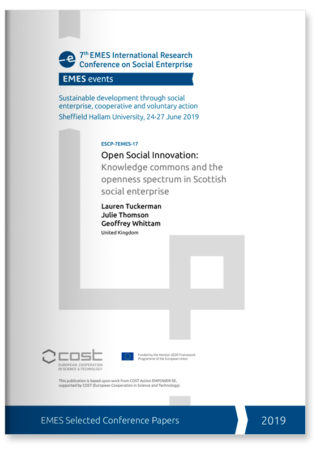 Open innovation is a term coined by Chesbrough (2003) to refer to porous organisational boundaries however critics have proposed their own models. Two academics have identified a disparity in how ‘open’ is being used in open innovation literature. Von Hippel (2010) notes that open can be used to refer to information commons (using open science and open source as examples) which is “open to all” or it can refer to organization permeability with a focus on “licensing protected intellectual property” as associated with Chesbrough’s (2003) model (von Hippel, 2010, p.555). Von Hippel (2010) and Wikhamn (2013) are connecting a form of ‘openness’ with an information or knowledge commons.

The knowledge commons narrative suggests a collective approach to decision making (Cumbers, 2012), with a focus on allowing access to the knowledge through rules. These rules do not necessarily focus on monetary benefit (Ostrom & Hess, 2007) but can be governed by relationships of “mutualism and respect, social need and use value rather than exploitation, profit and exchange value” (Cumbers, 2012, p.127).

This suggests two possible approaches towards open innovation within social enterprise: a commons approach to managing innovation knowledge or a ‘controlled’ approach. These two approaches could be tied to the dual motivations embedded in social enterprise: the need to generate income, and the requirement to have social impact (Doherty et al., 2014). A ‘controlled’ approach could be used to generate income where as a commons approach could increase social impact through free sharing of information.

These concepts are explored through two qualitative case studies with Scottish social enterprises. The researcher undertook participant observation for a period of a year with both organisations. Observations were supplemented with interviews and a document review.

Initial findings from the two longitudinal case studies suggest diversity in the approaches used by the social enterprises studied; both within organisations and from comparing organisations. One organisation, fronted by a central social entrepreneur, uses a ‘blended’ approach to managing open innovation; using a commons approach to the more social aspects of the business but maintaining protection (through licensing) of other developments. The other organisation, which employs a more collective decision making approach, takes a more ‘commons’ approach to their social innovation knowledge. This paper contributes to the fields of knowledge commons, open innovation and social innovation by exploring the ways in which they are connected and proposing a framework for further study. The findings could have implications for policy and practice in that knowledge, built by communities could be seen as a public right, and how access is controlled is then of public interest.

This paper argues that there are connections between open social innovation, and another well-established field of research, the knowledge commons. A well-established definition of a commons is “a resource shared by a group of people that is subject to social dilemmas” (Hess & Ostrom, 2007, p.3) and knowledge as “all useful ideas, information, and data in whatever form in which it is expressed or obtained” (Hess, 2012, p.14). This would suggest that a knowledge commons is any useful ideas, information or data, in any form, that is shared by a group of people and subject to social dilemmas. This perspective suggests that all knowledge within an organisation could be considered a knowledge commons. The social dilemma applied to the innovation knowledge commons within an organisation is whether or not the information should be shared, and if so, under what arrangements. This research aims to explore the connections between these theories using evidence from two in depth case studies of social enterprises in Scotland.

As social enterprises are asked to become more business-like (Dart, 2004), while simultaneously competition for funding increases, there is a renewed interest in diversifying incomes streams. This could be achieved by exploiting intellectual property within the social enterprise. There is an ethical question raised by putting up barriers to knowledge that communities helped to create. The knowledge created by communities could be considered a ‘commons’ – a resource to which all have a right to access (Wikhamn, 2013). Thus a social dilemma is created around exploiting (through enclosing) the innovation knowledge within a social enterprise to ensure the sustainability of the organisation, versus opening up innovation knowledge, for the common good, as it was made communally.

These concepts are explored in the following section which concludes with a proposed framework. This is followed by an overview of the methodology used to gather data on this phenomenon with subsequent sections discussing how these ideas work in practice, through the initial findings and discussion.