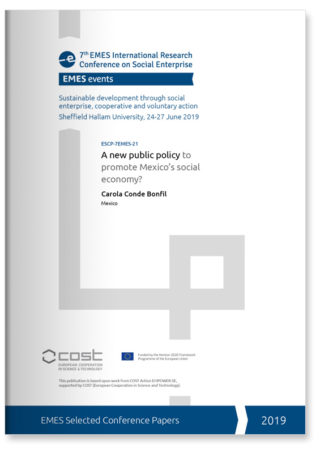 Social Economy in Mexico traces back to the post-revolutionary period (as early as 1921); nonetheless, there is a recent recognition for it. One could affirm that the social economy is currently facing its institutionalization period, as it was during the second decade of the current century where laws, government agencies and programs were introduced. Namely, the Law on Social and Solidarity Economy, the National Institute of Social Economy with its Advisory Board, and the Program for Social Economy Promotion, one of its main tools for promoting this sector.

On the 1st of December 2019, Andrés Manuel López Obrador, candidate from the Morena Party, took office as the president of the country. He was part of the opposition, which means that he didn’t belong to any of the two political parties that had been holding power during the 20th and 21st centuries.
Andrés Manuel López Obrador has been the president who achieved the highest percentage of votes in the history of the country (53.19%), so the people expected and still expect he could break neoliberal policies, and really support the social economy.

In this paper, we will review the foundation of the public policy to promote the social economy through its three bases: