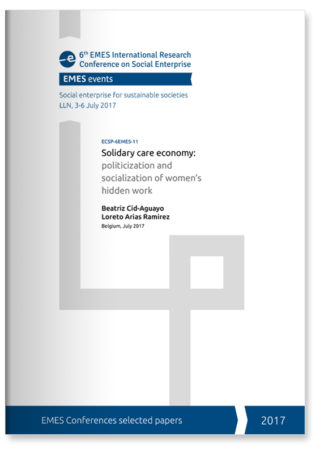 This paper is based on an action research process regarding economic collaboration networks in irregular urban settlements, or “campamentos”, located in the city of Talcahuano, Gran Concepción. The city is a deindustrialized and neo-extractive area of contemporary Chile. The research was carried out in collaboration with a traditional foundation that works with the regularization of urban settlements. This foundation was particularly interested in exploring the potentialities and viability of solidarity economy strategies to improve their approach to intervention in a context perceived as strongly individualistic.

The study was organized through a set of workshops developed with women in three campamentos (shantytowns), using a culturally contextualized version of the methodologies proposed by the Gibson-Graham (2006) approach to community economics. During these workshops the variety and density of local economic practices were problematized so as to project alternative economic imaginations. The development and results of these workshops question the social perception regarding the prevalence of an individualistic behavior and allow a debate around the possible relationship between two literary and political bodies: the solidarity economy and the feminist care economy.

The discussion about care economy recognizes the economic value of the set of activities developed mainly within households to care for dependent people –children, the elderly, and the ill– and to reproduce life. More generally, it recognizes the enormous amount of invisible work developed around reproductive and domestic labor, ranging from breastfeeding to gardening, and mainly developed by women through unpaid work. The efforts to measure it, through time-use surveys, show that care economy represents up to 40% of GDP. In a more political and analytical sense, care economy can be argued to produce the real fabric of life, and as such it is structurally prior to, and a precondition for, formal economy. In addition, it is organized through non-capitalist values such as cooperation and affection.

The theoretical and political project of solidarity economy, in turn, is aiming to visibilise and promote forms of production, exchange, and consumption that root economic behavior in an ethical and political framework. In other words, it is a heterogeneous form of economy which prioritizes work and community over the logic of capital accumulation. This framework includes from classical sectors of the social economy, such as trade associations, cooperatives, social enterprises, etc., to various expressions of the popular economy, such as barter and collective savings systems.

The solidarity economy project, in its agenda for visibility and articulation of other economies, has made little systematic effort to recognize the economic density of care in homes. This is paradoxical because, despite the fact that domestic work is certainly transcended by the power dynamics of patriarchy, it also represents an area of economy organized not through self-interest, but through cooperation and affection. As a consequence of this low visibility, there has not been a systematic
effort to politicize and develop cooperative systems to reorganize care work. We believe that a discussion of care economy through the lens of solidarity economy can enrich both. This reveals new political and economic possibilities for feminism –in terms of making domestic activities public, valuable, and political– and for social economy movements, as it opens another economic space for its political discussion.

The study was developed with PAR elements in three campamentos in the hills of Talcahuano, in the city of Concepción, Biobío Region. The social and historical analysis of campamentos in Chile shows a change in their treatment over time. In the 1980s, during the dictatorship, they were perceived as places that fostered active organization and solidarity economy. In the neoliberal democratic context, with public housing policies increasingly tending towards adopting eradication processes, they are considered places of political clientelism and individualistic behavior with scarce territorial rooting due to the precariousness and temporality of the settlements.

The study showed important differences between the studied shantytowns; one of them was certainly individualistic and dependent on clientelistic networks, while the other two maintained important and active solidarity economy networks, thus challenging the perception in the literature regarding the loss of solidarity bonds. More importantly, these spaces of economic creativity and associativity were brought together almost exclusively by women who seek to improve, alleviate, and organize their family care work through cooperation. As a result, they build fluid networks for collective savings, insurance, and child care that socialize their home economics organization. Despite this, the women still do not recognize these actions as valuable economic activities, as they are not perceived as part of the monetary economy.

These results allow raising the question of whether the popular promotion of solidarity economy in vulnerable contexts, in addition to promoting formal productive economic processes (such as the cooperative model), must truly begin by politicizing, socializing, and valuing those activities carriedout by women invisibly, free of charge, and through generosity.