Social Innovation, Conflict, and the Institutionalization of German Energy Co-operatives 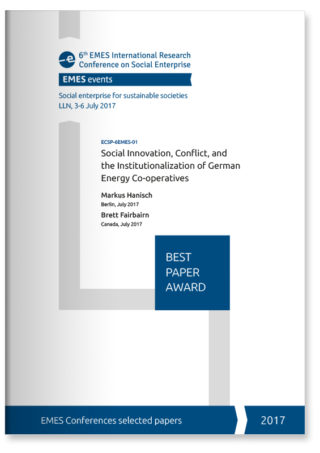 Transformation to sustainability requires an understanding of the underlying innovation processes that includes new types of “social contracts” between governments and an activated civil society. Leading think tanks like the Intergovernmental Panel for Climate Change (IPCC 2012, 2014) or the German Advisory Council on Global Change (WBGU 2011) stress the roles of a combination of elements like new technologies, collective action and behavior, as well as policy experimentation.

In our paper we draw lessons from the example of energy system transformation for the theory of innovation. By 2015, roughly a decade after the passage of Germany’s Erneuerbare-Energien-Gesetz (Renewable Energies Act), electricity consumption from renewables reached 30%. Within a few years, besides changing the sources of energy, Germany had widely decentralized energy production, integrated energy enterprises as well as citizens in new ways into regional economies and developed new policies, types of finance and governance for its renewable energy sector. In the same period of time Germany witnessed the largest increase in cooperative foundation numbers over the last 40 years and the emergence of a new type of cooperative, the renewable energy cooperative.

How can the course of this multidimensional, multilevel transformation best be explained? In our paper we claim that conventional innovation theories need to be complemented in order to explain what’s going on in Germany’s energy sector. We further claim that the case of the German energy system transformation provides a formidable example for discovering those elements yet missing in the conventional understanding of innovation processes.
In our paper we characterize important stages, drawbacks and achievements of the German energy transformation. We then briefly introduce into 20th-century economic theories of innovation. Concepts like Increasing competition, changing factor prices, entrepreneurship, and knowledge diffusion surely add to an explanation of German energy transformation. However, these concepts cannot sufficiently explain policies, civil society engagement and the speed of organizational innovation.

We argue that the dynamics of the German transformation to renewables cannot be explained without consideration of the “cognitive dissonance” Germans had felt after two nuclear disasters prior to the turn of the century. After that it was rather the increasing role of the public climate change debate that has activated “civil society”- actors lobbying for support of smaller scaled renewable energy production projects.

We find that, triggered by innovative state policies and cognitive dissonance, the German energy transformation was driven by both economic incentive and citizen collective action. As renewable energy projects became widespread phenomena at the German countryside, competition for land and so called “not in my backyard” problems threatened the project.

The participation of citizens in the financial costs, benefits and allocation decisions of energy production is a way to overcome such problems. Because the co-operative is a proven form for collective finance and participatory multi stakeholder organization there was widespread adaptation and rapid diffusion of renewable energy co-operatives in this period.

We claim that the development process of the new renewable-energy sector in Germany illustrates the important role of cognitive aspects and aspects related to social innovation processes – the adoption of new ideas, norms, and values – and their interplay with technology adoption in the context of citizen co-construction and co-production of institutional policy. Further, we claim that the emergence, adaptation, and diffusion of energy co-operatives illustrate significant processes of conflict negotiation and re-negotiation in a dynamic environment. We conclude with observations regarding the future of the sector as well as what its experiences mean for innovation theory.