Individual and collective roles in organisational governance: focus on governance activity through a systemic approach 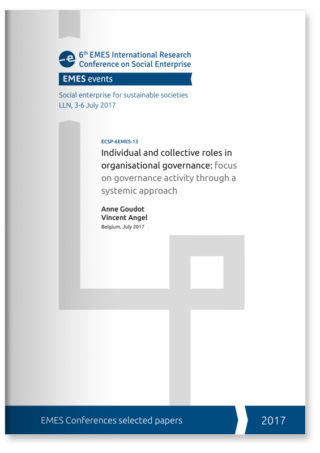 This exploratory research envisages organisational governance with a systemic approach: the governance activity is generated by a structure, which is composed of groups and leaders where the leaders’ behaviour partially determines the interactions between components of this structure. This new model is defined and tested via intervention research processes based on an ethnographic approach, in two third-sector organisations: a cooperative supermarket and an ecovillage. The results demonstrate the heuristic interest of this approach for studying how the collective and individual dimensions are shared within the organisational governance system and subsequently, the compatibility between these dimensions. They also demonstrate its practical interest for third-sector collectives, which can use this model to gain autonomy in their metagovernance (governance of governance) capability.

We identify and discuss a type of leadership not hitherto described in the literature that we describe as pro-participatory. Unlike the figure of the “heroic” social entrepreneur often seen as the driving force of collective action, the pro-participative leader supports the achievement of the organisation’s aims. He/she does this by creating the conditions for participatory governance and by fostering the development and autonomy of individuals through a servant leadership type of management. The collective and the pro-participatory leader are mutually shaped. The prospects and limitations of this research are discussed.

Collectives are forming all over the world with the aim of influencing societal change: Their goal is to provide an alternative to the “market-oriented” model through experimenting with economic systems based on reciprocity and sharing. Ecovillages that develop permaculture, community-supported agriculture and cooperative supermarkets are all examples of this emerging trend. These collectives aim to place collective interest above that of the individual and promote environmentally-friendly development through prioritizing the values of solidarity, reciprocation, sharing and democracy. They mostly seek to promote a “collective” dimension of their governance that is based on democratic principles (Nyssens & Defourny, 2016), or by adopting community operating modes.

In the social enterprise typology recently defined by M. Nyssens and J. Defourny (Nyssens & Defourny, 2016) to describe the changing landscape of the social and solidarity economy (the “third sector”), these organisations fall under the “non-profit social enterprise” or “social cooperative” types. They have association or cooperative status. Their members are composed mostly of volunteers; staff recruitment, especially when it comes to choosing an executive director, generally arises as the organisation grows. In their governance system, there are generally one or more bodies, made up of elected or all members, which play a central role. When these organisations turn professional, a distinction may arise, to a greater or lesser degree, between the political structure (elected members involved in governance) and the technostructure responsible for operational steering of the collective action (Meier & Schier, 2009).

These organisations have specific features which make governance a particularly complex issue, a factor that has been highlighted in several publications (Spear, Cornforth & Aiken, 2009) (Meier & Schier, 2009) (Enjolras, 2009a) (Braconnier & Caire, 2012). These features include instability and difficulty in collective management (volunteer commitment issues); gaps in governance expertise; tensions between the political and operational dimensions of governance, particularly due to a lack of informational symmetry; organisational adjustments due to consistent interaction with the environment; resource hybridisation; etc. This complexity of factors affecting governance may have a significant impact on the smooth running of the collective, which may cause deviation from its operating mode and initial aim (Angel & Hermans, 2016).

These factors can create tensions in organisations between the striving for participatory governance on the one hand (which implies a long, deliberative decision-making and operational process) and the need for effective action on the other (with the appointment of individual managers for project management and operation) (Braconnier & Caire, 2012). These collectives seek to find their own socially innovative models of governance, as a result of their disapproval of conventional governance systems, however they lack a suitable “neutral” frame of reference (i.e., not prescriptive of a type of organisation) (Meier & Schier, 2009).

We addressed this need by developing an organisational governance model, where governance is viewed as a system made up of groups and leaders, which generates the governance activity. We did so through two intervention research studies (IR): in the first IR, with the cooperative supermarket, we inferred that combining structure, activity and leadership is an interesting way to represent governance mechanisms. We applied a systemic approach to translate this combination into a hypothetical model. We used this model to create an interpretative representation of the existing governance (frame of reference) for our second IR with an ecovillage. This frame allowed us to highlight the respective roles of the collective and individual dimensions in governance activity. During the second IR, we observed and followed collective use of this frame of reference within a metagovernance process governance of governance (Hufty, 2016) . At the request of the collective, we designed this process in order to reinforce the participatory dimension of the organisation. The goal of this experiment was to create the conditions so that the collective could respond to its own governance issues, which would result in the empowerment of the group in its metagovernance practices.

Furthermore, this analysis of the ecovillage governance system allowed us to demonstrate the compatibility between the participatory dimension of governance and the role and behaviour of leaders. We could show that the leaders’ activity consisted of, on one hand, management-related tasks, with behaviour similar to that of “servant leadership” (Dierendonck, 2011); and on the other, of tasks creating the conditions for participatory governance. This compatibility between participation and leadership is the result of a mutual adjustment process, where leaders and groups interact and develop mutually. These observations have led us to propose and discuss a type of leadership not hitherto identified in the literature that we describe as “pro-participatory”.

We also discuss the role of the researcher in the metagovernance process. Finally, while this study paves the way for further research on social enterprise governance, it involves limitations discussed below.