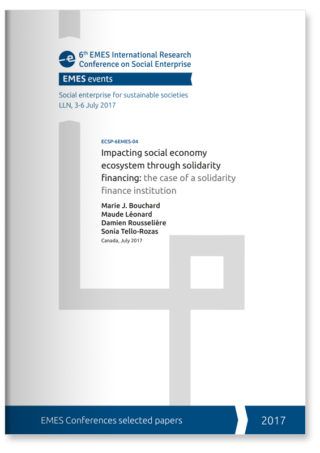 How do solidarity financial institutions impact the social economy and its ecosystem? The literature suggests a number of reasons why social economy enterprises (SEEs) should benefit from accessing capital to support their development and eventually scale up their impact (Hebb et al. 2008, Karaphilis et al. 2010). However, traditional financial tools are poorly adapted for SEEs’ that develop emerging activities, respond to democratic aspirations, and exclude financial returns on investments. Traditional financial institutions do not know how to estimate the riskiness of such enterprises (Cornée 2017). While there is a growing interest for alternative forms of impact investing, literature points out that evidence for impact is generally missing (Guézennec and Malochet 2013). Proposed solutions mainly focus on measuring the impacts of the financed activities. However, limitations of some of the most popular methodologies are well known (Kroeger and Weber 2016). Access to finance is still only one of the components of the global ecosystem required for the development and growth of social economy enterprises (Rodert and Zvolská 2015; European Parliament Social Economy Intergroup 2015).

Other aspects are crucial, namely knowledge of risk assessment in the specific case of SEEs, and intermediation between investors and project promoters. Yet, very little research has studied impact investment institutions themselves or their ecosystem. This paper focuses on the effects solidarity financial institutions (SFIs) have on the SEEs and their support environment.

We studied the case of a Québec SFI that acts as a lender of development capital funds (long term uncollateralized loans) to SEEs. Using a mixed methods approach (Small 2010), we analysed data from different sources (information about the financed enterprises, secondary public data and interviews), namely exploiting of a unique set of detailed financial and non financial information used by the SFI to estimate the risk associated with 435 loans to SEEs between 1997 to 2014.

Traditional financing tools are in general poorly adapted for social enterprises, many of which are cooperative and non-profit enterprises, i.e., social economy enterprises (SEEs). For legal reasons, capitalizing SEEs poses challenges. For one thing, non-profit enterprises do not issue shares and cannot accumulate financial reserves. In the case of cooperatives, interest on shares is limited. Another concern for investors is that SEEs give primacy to their social goals over financial benefits. Benefits, in the case of SEEs are conceived as a tool to achieve social goals, not as a goal in itself. As they do not intend to maximize profits, SEEs can operate and develop projects in fields that offer low or uncertain profitability. They respond to needs that do not attract private traditional for-profit entrepreneurs, and for which government doesn’t efficiently fill in efficiently. Hence SEEs are typically, at least at their origin, small or medium size enterprises, involved in activities that are emerging, not capital intensive, and destined to a small portion of the demand or to low-income customers. In addition, SEEs are collectively owned and democratically governed by members who are not motivated by benefits, and who for the most serve on a volunteer basis. Therefore, SEEs are not the “cold-feet risk-averse” investors’ cup of tea. Therefore, the capital to launch and develop social economy (SE) projects is scarce. This problem of credit rationing and credit constraints has already been highlighted in the literature (e.g. Fedele and Miniaci 2010, Maietta and Sena 2010).

Such perspectives ward off traditional investors and financial institutions from SEEs. For these reasons, options for capitalization are limited to short- and medium-term debt. Accessing the much-needed long-term investment is difficult in most cases (Mendell and Barbosa 2013). For one thing, conventional financial institutions do not know how to estimate the riskiness of such projects (Cornée 2017, Harji and Hebb 2010), which, from their standpoint, are too complex. Finding a financial institution capable of supporting SE entrepreneurs is therefore crucial, namely in their start-up and growth stages or when they require financial liquidities to undertake new projects. This is true for SEEs as well as for other social enterprises, in emerging businesses as well as in the more mature ones.