What is a fair profit for social enterprise? Insights from microfinance 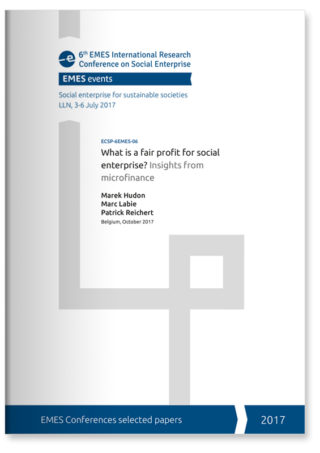 Although microfinance organizations have typically been considered as inherently ethical, recent events have challenged the legitimacy of the sector. High interest rates and the exorbitant profitability of some market leaders have raised the question of what can be considered a fair, or ethical, level of profit for social enterprise. In this article, we construct a fair profit framework for social enterprise based on four dimensions: the level of profitability, the extent to which the organization adheres to its social mission, the pricing and the surplus distribution. We then apply this framework using an empirical sample of 496 microfinance institutions. Results indicate that satisfying all four dimensions is a difficult, although not impossible, task. Based on our framework, 13 MFIs emerge as true double-bottom-line organizations and tend to be relatively young, large MFIs from South Asia. Using our framework, we argue that excessive profits can be better understood relative to pricing, the outreach of the MFI and the organizational commitment to clients in the form of reduced interest rates.

Social enterprises aim to incorporate a social mission through commercial activities. Microfinance institutions are one of the most well known examples of social enterprises. While the microfinance sector was frequently considered as intrinsically responsible or ethical, a few recent events have questioned the legitimacy of the sector (Bateman, 2010; Cull et al., 2016). One such event concerns the flagship microfinance institution (MFI) Banco Compartamos, the largest MFI in Latin America, which has charged annualized interest rates above 70% for a number of years with return on equity consistently higher than 30%. In April 2007, Banco Compartamos completed an initial public offering on the Mexican stock exchange. Existing shareholders swapped 30% of Compartamos capital and gained more than $450 million (Cull et al., 2009; Rosenberg, 2007), which ignited a global debate culminating with Nobel Peace Laureate Muhammad Yunus’ accusation of “money laundering” against Compartamos managers.

Since the IPO, Compartamos has reported profits of more than $100 million every year. Yunus argues that “poverty should be eradicated, not seen as a money-making opportunity. There are serious practical problems with treating microcredit as an ordinary profit-maximizing business” (Yunus, 2011, A23). This case is striking but not unique. Indeed, although most microfinance institutions don’t generate huge profits, there is a growing trend of commercialization highlighted by the listing of MFIs on public stock exchanges (Brière and Szafarz, 2015). This commercialization has led to accusations of unethical practices by MFIs, resulting in the exploitation of some of their customers (Hudon and Sandberg, 2013).

This raises a fundamental question on the level of profits that can be considered fair, non-exploitative or acceptable for social enterprises. Can social enterprise simultaneously make substantial profits and serve the poor? Social enterprises, such as MFIs, are an example of hybrid organizations that combine multiple institutional logics, i.e. development or social logics and the market logic of profits (Battilana and Dorado, 2010). These various logics co-exist and sometimes conflict, forcing managers to make difficult decisions. The pricing of microcredits is a key management decision for MFIs. Setting interest rates has financial implications since it is a key source of revenue but also carries ethical dimensions since microcredit clients are poor. Pache and Santos (2013) argue that 3 the banking logic would require profit-maximizing interest rates while the development logic would suggest low interest rates for poverty alleviation. MFIs often try to compromise by setting interest rates at an intermediate level (Pache and Santos, 2013). Balancing the two goals is obviously challenging. (…)