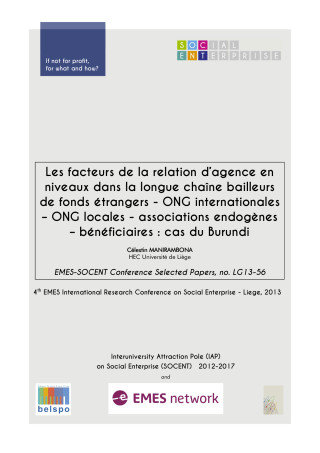 Several studies on the sources of funding for local NGOs in Africa highlight their dependence on foreign donors, while in developed countries, these organizations have multiple resources. Investigations previously done show that the majority of resources of local NGOs come from foreign donors, and most of them are dead at inception due to lack of funding. Before reaching the beneficiaries, financing goes through several players who are related by an explicit contract: Foreign donors – International NGOs – Local NGOs – Endogenous groups – beneficiaries populations.

The literature points to the existence of a contractual relationship between the one who runs the activities and the one that funds them. Yet despite this explicit contract, some actors in this chain of relationships are influenced by other factors and / or their interests and make decisions that have no direct links with the mission of the organization. This leads us to ask  ourselves two questions: first, the question about the factors that characterize the relationship between actors and secondly whether at all levels, the actors involve other stakeholders.

The present paper aims to provide a conceptual and theoretical framework to characterize the agency chain relationship between these different actors. Although there are studies on the application of the agency theory in the governance of Nonprofit organizations, there have been very few studies done on the agency chain relationship between these organizations.  It is then necessary to make new theoretical developments on how local NGOs in Africa in general, and Burundi in particular, are funded and governed; and that,  in the case where the actors in the chain relationship are in different contexts. To do this, we will first mobilize and apply the agence theory and others theories of governance at this agency chain relationship. We conclude by showing the peculiarity of Africa in general, and Burundi in particular with additional elements that enhance this agency relationship, making then the conceptual model  complex.