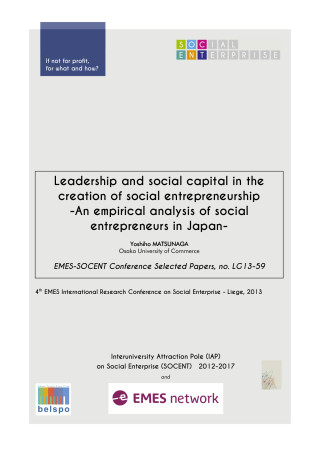 Much attention has been focused on social entrepreneurs that take full advantage of their business skills in the pursuit of “profitability,” in addition to pursuing “public utility” through the production and supply of public goods and services that satisfy the demands of the community. Social enterprises combine commercial and philanthropic elements in a productive balance (Dees 1998). Not only researchers but also many citizens and policy makers are expecting social entrepreneurs to be the new principal suppliers of public goods and services, and media such as academic journals, newspapers, and television programs that feature social entrepreneurs have begun to appear frequently . Because of this social and economic factor, a number of domestic and foreign studies related to social enterprises has increased, and it seems to a certain extent as if the research may have matured.

However, it is difficult to say that previous studies are organized clearly and systematically when viewed from the perspective of “new principal suppliers of public goods and services.” Tsukamoto, Nishimura, and Matsunaga (2007) and IFF Research Ltd (2005) are examples of previous research that has a statistical understanding of the characteristics of social entrepreneurs; however, most of the previous researches do not extend beyond the scope of simple tabulation. In addition, a significant number of previous researches, especially in Japan, are collections of the heteroschedasitc management approaches carried out by each unique and charismatic social entrepreneur .