Hybridization of diverging institutional logics through the “common tone”: the case of social entrepreneurship 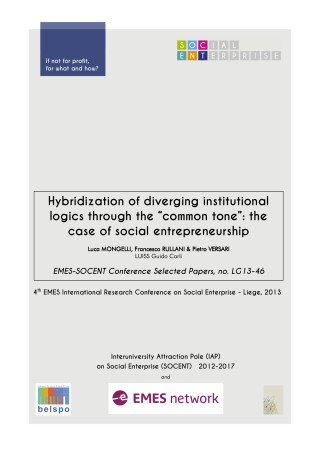 In organizations, conflicts due to the presence of different logics defining individuals’ identities and guiding individuals’ behaviors have been at the center of a fruitful and wide debate. As shown by this literature (Lounsbury, 2007; Marquis & Lounsbury, 2007; Reay & Hinings, 2005, 2009), organizations characterized by conflicting logics need to strike a balance between actions and identities consistent with one logic and those related to the other. Such balance is however difficult to sustain in the long run. Stakeholders sensitive to one logic react positively to the organization’s effort to fulfill their expectations, but stakeholders closer to the other logic are at least puzzled by a behavior they do not legitimate. Over time the organization will inevitably face the need to reassure the second group of stakeholders by altering its original behavior, priorities, and messages. This at the expenses of the relation with the first group of stakeholders. The organization “juggles” using the components of the two logics, moving back and forth and unable to merge them.

This is an inevitable outcome if we believe that within an organization conflicting logics cannot coexist. The literature has shown that coexistence of conflicting logics is indeed very difficult to achieve (Glynn, 2000; Pache & Santos, 2010; Reay & Hinings, 2009; Vallaeys, 2004). Most empirical articles (Hensmans, 2003; Kitchener, 2002; Lounsbury, 2007; Reay & Hinings, 2009) able to detect such coexistence do not provide a compelling theoretical argument allowing the generalization of the finding, and mainly focus on the heuristics used by the actors to cope with the frictions between the conflicting logics under scrutiny.

In this paper we claim –and to the best of our knowledge we are the first doing it – that not only such coexistence is possible in general terms but -under certain conditions- such coexistence is not a coexistence any more: it is a fusion reached by means of a process able to satisfy both logics at the same time. To put forward this idea we use the analogy with music composition. In music, different pieces built on different harmonies can be merged exploiting the “Common Tones” of their scales. If such tones are used carefully, and if they are stressed enough, the coexistence of different harmonies makes sense and assumes consistency, becoming instrumental in the development of the melody. We use this analogy to claim that in organizations experiencing conflicting logics it is possible to generate value-creation processes that have the same bridging function as the common tone in music, fostering the fusion of different logics into a coherent business model.