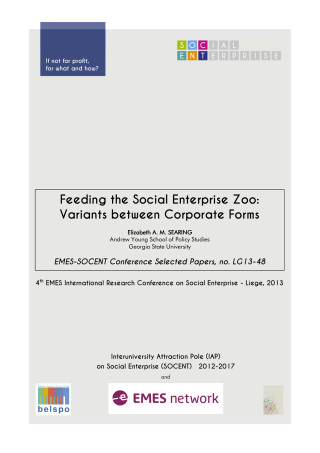 The term “social enterprise” has had immense growth in popularity for the last fifteen years (Wolk, 2007); however, the concept still does not have a definition which receives unanimous consent.  Though the core tenet of the concept – commercial activity for social betterment – is not in dispute, it is the operationalization and classification of actual entities which cause disagreement.   Should nonprofits be considered social enterprise, or should the potential to realize a profit be a prerequisite?  Must an organization be a standalone corporate entity to be a social enterprise, or can one qualify as a tandem structure between two or more organizations, or as a department or subsidiary within a larger organization, such as the certification of Ben & Jerry’s (a division of Unilever) as a B Corp?  As academics and professionals charged with offering advice based on an understanding of the sector, how can we proceed without an adequate definition of what we are experts on?

There are three definitions which have received attention in the literature that will be addressed here.  The first is the definition adopted by Social Enterprise UK.  It consists of six principles:

These are all generally accepted as guiding themes by the sector at large; however, it does not offer any guidance as to the more specific questions we outline regarding corporate form.