Exploring the performance of social cooperatives during the economic crisis: The Italian case 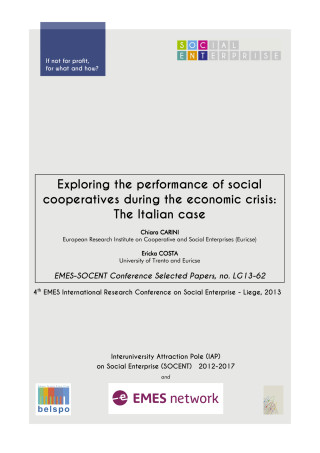 The current economic crisis has hit the Italian economic system hard (Bugamelli et al, 2009; Accetturo et al., 2011) and has once again highlighted the economic divide between the northern and southern regions of Italy (Banca d’Italia, 2012).

Official statistics (Istat, 2012a; Istat, 2012b) outline a clear picture of the economic situation of Italian enterprises during the crisis, but nevertheless do not provide data on social cooperatives, which have thus far represented the most important type of social enterprise in Italy (Defourny and Nyssens, 2008; Euricse, 2011).

Starting from these premises, by developing a multiple factor analysis (MFA), this paper aims at deepening the understanding of the economic performance and the employment features of social cooperatives in 2008 (before the crisis) and 2011 (after the beginning of the crisis) in order to better understand how the employment and economic performances of such organisations have changed during the years of the economic crisis. Particular attention will be paid to the analysis of the differences between Italy’s three main geographical areas.

These objectives are achieved by carrying out an empirical study using data from the Italian social cooperatives contained in the data warehouse developed during a research project of Euricse. This is based on the Analisi Informatizzata delle Aziende (AIDA) database of the Bureau van Dijk, integrated with other administrative databases, and contains data for over 72,000 Italian cooperatives.