Developing a Model of Social Entrepreneurship: A Grounded Study Approach 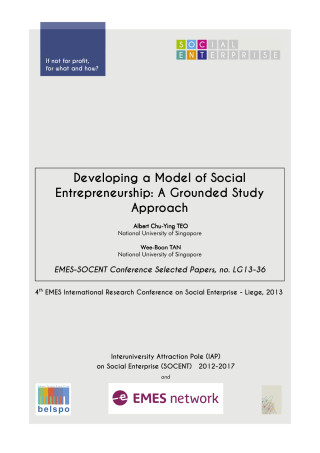 Given the inductive nature of this study, grounded methodology (Glaser and Strauss, 1967) is used to develop fresh theoretical ideas and perspectives on social entrepreneurship. In particular, the concept-indicator model of theory development proposed by Glaser (1978) is adopted. This model encompasses 4 stages: (1) comparing incidents applicable to each category; (2) integrating categories and their properties; (3) delimiting the theory; and (4) writing the theory.

For this study, in-depth interviews are conducted with ten social entrepreneurs who currently manage their respective social enterprises in Singapore. During the interviews, the social entrepreneurs discuss their motivations, their personal backgrounds, and their perspectives on social entrepreneurship, the social enterprise sector and the social enterprises that they run. The interviews are transcribed, and the contents are critically analyzed and open coded into conceptual categories (Glaser, 1978). Each of these categories assigns a common meaning to multiple data observations (Locke, 2001). These conceptual categories are then further evaluated against data observations through selective coding and integrated with other categories to make further progress in the theory development (Glaser, 1978). The analysis eventually comes to a close when the theory ‘solidifies’ (Glaser and Strauss, 1967), and each category reaches the point of saturation where “subsequent data observations result in no new naming activity” (Locke, 2001).

The form of each interview is semi-structured (Ghauri, Gronhaug, & Kristianslund, 1995). While a fixed set of guiding questions are posed, the actual flow of the interview is open-ended in nature and allows for free responses. The interviews follow the guiding principles of grounded methodology (Glaser & Corbin, 1967; Strauss & Corbin, 1998; Goulding, 2002), such as open sharing, reduced rigidity and minimal guiding. Open-ended questions are used as much as possible to allow generation of unguided answers.