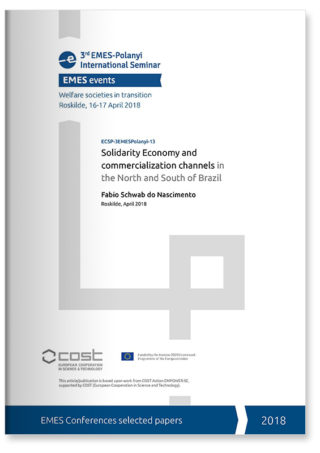 The commercialization is one of the biggest problems faced for Family Farming in a capitalist market, therefore depending on the form chosen of the commercialization channel, it will have greater or minor numbers of involved agents between the agriculturist and the consumer, inside of a capitalist perspective of aggregation of values to the products. The agriculturist and the consumer inside of the current model of Agrifood Systems are subject to many factors, that go from who chooses what to be planted to what will be consumed. In this way, the commercialization channel becomes very important.

We will use the concept of the commercialization channel or distribution adopted for Kotler (1998), which defines how being the sets of interdependent organizations wrapped in the process become a product or available service for use or consumption. That is, it is those relationships that establish the link between product and consumption, making it available to consumers through the articulation of different marketing flows. These channels can be called short channels, which are those who have at most an intermediary between the farmer and the consumers, and long channels that have some intermediates between them. Inside of this perspective the Solidarity Economy shows that Laville (1994) characterized the Solidarity Economy as a set of economic activities whose logic is distinct in such a way to the logic of the capitalist market as well as much of the State logic.

This study aimed to understand how the selection of these processes of commercialization of products of ecological base of Family Farming in Brazil are important for the development of a fairer Agrifood System within the vision of a Solidarity Economy in Brazil. For this, its analysis was used the study the case of experiences of the Association Ecologists Farmers Ipê and Antonio Prado (AECIA) from of Ipê and Antonio Prado, Agroecology Group ECONORTE city of São José do Norte experiences of the state of the Rio Grande Do Sul/Brazil, Cooperative Irituia city of Iriutia and Federation of Cooperatives of Araguaia – Tocantins (FECAT) city Maraba experiences of the state of the Para/Brazil these presented distinct ways of commercialization.