You are here: EMES - International Research Network | Publications | Conference papers | 3rd EMES-Polanyi International Seminar | Rural social and solidarity economy initiatives from Central and Eastern Europe – In contexts of peripheralisation to what extent may participation be a reality?

Rural social and solidarity economy initiatives from Central and Eastern Europe – In contexts of peripheralisation to what extent may participation be a reality? 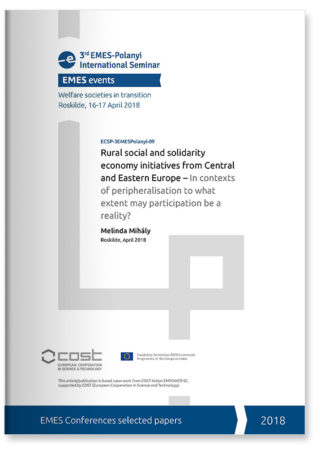 The main aim of this paper is to better understand how participation may be realised in villages undergoing peripheralisation (such as loss of social capital due to selective out-migration, lack of local purchasing power due to economic decline, shrinking public infrastructure). Two social enterprises have been selected from peripheralised villages of Central and Eastern Europe. Both have a participatory approach, but the initiatives differ regarding the level of marginalisation of their local stakeholders. In the first case a complex development program has been created for and by the Roma and non-Roma inhabitants of a Hungarian village undergoing advanced peripheralisation (or what Hungarian researchers label as “ghettoization”).

As through processes of peripheralisation the symmetric structures of reciprocity (Polanyi 1971) have already been destroyed in the community, the key initiator of social and solidarity economy who is a representative of a local Foundation comes outside of the village. In the second case, cheap land and the proximity of nature in a village of a peripheralised region of North-Eastern Germany provided an attractive environment for ecologically-minded people searching for a rural alternative for their urban lifestyles. The newcomers (“Zugezogene”) have created an alternative village school organized around the idea of environmental sustainability. Mobilising the concepts of empowerment through a capability-based approach, the aim of this paper is to better understand in what ways participation can be realized by and for the inhabitants of villages undergoing peripheralisation. Ethnographic methods, such as participant observation, interviews with the key actors of the initiatives and documentary analysis help in better understanding how participation is reached, practiced, developed and increased in rural SSE initiatives.