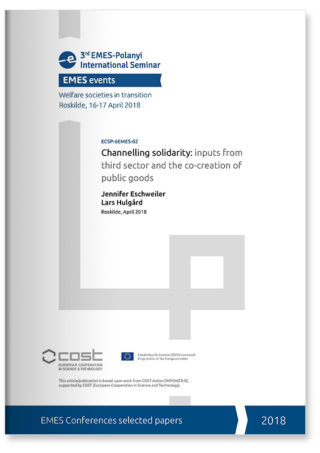 This paper is based on findings from the H2020-funded project ‘SOLIDUS – Solidarity in European Societies: Empowerment, Social Justice and Citizenship’ (2015-2018), bringing together 14 research teams from 12 countries in Europe. The project explored expressions of solidarity from an interdisciplinary approach, looking at spatial differences, notions of inter- and intra-group solidarity, fiscal solidarity across Europe, activating social citizenship, and the gender-perspective of solidarity. The overview of findings presented in this paper are part of yet another line of investigation: third sector and social economy (TS/SE) organisations as transit zones for successful solidarity actions by way of collaboration with public actors and agencies in the fields of employment, education, health and housing.

Research was carried out before the backdrop of multi-dimensional crises: austerity measures are transforming public administrations and social policies across Europe; welfare policies have been shifting from institutional and redistributive orientations towards enabling policies and market-driven competition. Disputes around the reception and integration of refugees increases polarisation within societies and the European Union, fuelled by rising socio-economic inequalities. As a result, social responsibility increasingly shifts from being a public concern to an individual and private concern (Hulgård 2010, Hulgård & Andersen, 2012).

At the same time civil society based organisations like non-profits, NGOs and social enterprises have always addressed gaps left by state policies. Their actions are not confined to helping people in need or providing services. Many social services delivered by such entities are co-designed by citizens or at least developed close to citizens, thereby ensuring decisions are made closer to their needs and are thus more innovative. For the same reason, the sector also plays an important role in democratic decision-making, as it can bring expertise in tackling social injustice to the deliberation table (e.g. Habermas, 1990). Finally, it has the potential to increase the social, political and economic autonomy of people (e.g. Keane, 1993, 1998), thus making a real contribution to individuals and communities alike. The goal is to integrate marginalized and socially excluded people through several economic and political principles that build a bridge between the public welfare state and a strong civil society.

Collaboration in the delivery of services between sectors is part of European social history, often defined and implemented at the local level due to principles of subsidiarity. Collaboration in the formulation of social policies varies across time, space and types of organisations. SOLIDUS seeks to make a systematic contribution showing different kinds of collaborations that foster social solidarity through collaboration in different institutional contexts and fields, uncovering some drivers and barriers that transcend political, cultural and socio-economic context. We refer to collaboration rather than co-production, as the academic debate refers to co-production as public administration working directly with citizens (i.e. Brandsen & Honingh, 2015), while we focus on the level of formal organisations.