You are here: EMES - International Research Network | EMES at the 40th meeting of the UN Task Force on Social and Solidarity Economy (UNTFSSE) 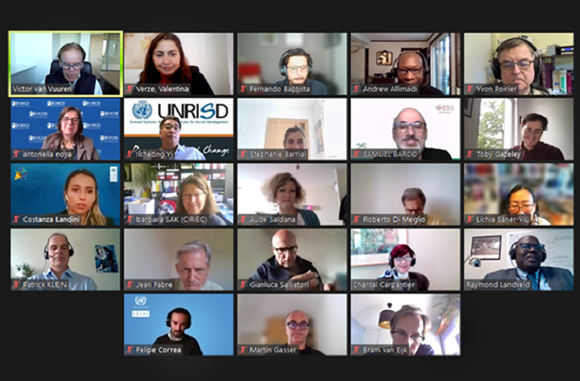 EMES is an observer member of the United Nations Task Force for the Social and Solidarity Economy (UNTFSSE) and, as such, actively participates in its meetings and initiatives. In that manner, EMES participated in the UNTFSSE meeting held virtually on 5th October 2022. It brought together more than 40 participants from the eight Task Force members (ILO, UNRISD, ESCAP, ECLAC, UNDP, UNDESA, UNCTAD and OECD) and the twelve observer organizations (Catalyst2030, CIRIEC, CSEND, EESC, EMES, EURICSE, DIESIS, GSEF, Euclid Network, ICA, SSE International Forum, RIPESS).

Reflections on enhancing the international dimensions of the SSE were shared, including the recent updates on the process leading to a UN resolution on the SSE and sustainable development. A brief overview was given on the ongoing and future steps following the adoption of the Resolution and conclusions concerning decent work and the SSE at the 110th International Labour Conference (ILC) of the ILO.

The meeting was an opportunity to share relevant information on events, projects and publications, such as updates on the activities of the Knowledge Hub and the development of an SSE Encyclopedia. Many EMES members have contributed to this Encyclopedia with specific entries and EMES is also part of the editorial board. In addition, the recent publication of the new UNTFSSE Position Paper: Advancing the 2030 Agenda through the Social and Solidarity Economy was mentioned.

During the round of members and observers sharing updates, EMES was invited to present reflections and findings stemming from ongoing research on SSE. Our director, Rocío Nogales Muriel, opened the debate on how research can play a role in increasing emerging forms of social enterprises, particularly in the cooperation between public administrations and civil society organizations.

In that manner, she called on the role of education institutions as allies for cooperation through all-level training and transdisciplinary research. Also, according to Nogales-Muriel, SSE research should involve different agents to contribute to research agendas at various geographical levels, as it was an example of the ICSEM project. In the 20th anniversary of EMES, she also emphasized the importance of nurturing networks, as they play an institutionalizing role in a consolidating field like SSE. During the meeting, Nogales-Muriel shared some EMES recent initiatives, such as the 9th edition of the EMES International Research Conference “Act locally, change globally: Social enterprises and cooperatives for more resilient economies and societies” with its 14 thematic lines and transdisciplinary forum. The publication of four books in the series available in Open Access, namely — Social Enterprise in Western Europe, Social Enterprise in Central and Eastern Europe, Social Enterprise in Latin America and Social Enterprise in Asia and the opportunity to contribute to the Special Issue of the Social Enterprise Journal, was mentioned as well.

Interested in learning more about how to join EMES? Drop us a line at members_at_emes.net .