READ AN ACCOUNT OF THE EVENT
“Afterthoughts from the Seminar”

(under the “Downloads” column on the right)

After the focus on the economic crisis of the 1st Seminar, the main objective of this edition will be to contribute to the analysis of contemporary modalities of the relationship between economy and democracy.

The Seminar aims to achieve a complementarity among the following four thematic axes:  

Overall if one aggregates the proposals of all authors cited, they recombine three analytical categories that neoliberalism seeks to eliminate: the teleological perspective, deliberation, and the diversity of economic principles.

This complementarity among the cited authors and others in their understanding of contemporary practices deserves further study with a view to clarifying both the obstacles encountered as well as and the progress that it allows. 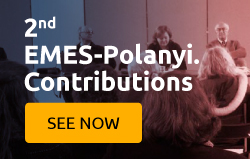